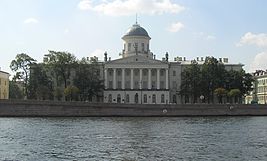 The Institute of Russian Literature (Pushkinskij Dom) of the Russian Academy of Sciencesis part of a network of institutions affiliated with the Russian Academy of Sciences. It is located in house 4 along the Makarova Embankment in St. Petersburg. The museum was founded on December 15th, 1905, by the noble initiative of Russian culture figures. The Russian Literature Institute began its life in 1899  to mark the centenary of Alexander Pushkin birth and to up the anniversary exhibition, which included 703 exhibits from individuals and various institutions. At the same time, on the initiative of the President of the Imperial Academy of Sciences, Grand Duke Konstantin Konstantinovich and under his chairmanship was established a Commission to discuss the issue of the monument to the poet. The idea of the monument placing was gradually transformed into the establishment of the “Pushkin House, a special literary pantheon where the relics of Russian writers of the 19th century would be collected and kept”. The meeting of the Commission, which approved this provision, was held on December 15th, 1905, this day is considered to be the birthday of the Pushkin House.